I’m sure we’ve all heard that William the Conqueror was, due to his parentage, referred to in his time as William the Bastard but a recent event on a Fourtharch weekend prompted me to think about the question “were the Normans all bastards?”

Picture the scene (and I’m afraid you are going to have to as I neglected to take a “before” shot as I hadn’t planned the article…), seven of us on a Saturday evening in Oxford at the Mitre, the local Beefeater. This was the evening of the annual 11/09 trip and earlier in the day we had visited Wychwood Brewery, followed by this year’s feature pub the iconic Turf Tavern and after a short rest and a rejuvenating coffee at the hotel we had ventured back into the centre of Oxford for the evening. On arrival we were shown to our table and presented with menu’s and something called a wine list, the latter of which I ignored having spotted on the way in that the real offerings were Hooky, Black Sheep and Hobgoblin. A difficult choice but given the evening ahead I opted for the Hooky as possibly the most sensible choice at the start of a long evening.

What happened next was a shock on a Fourtharch weekend- someone suggested ordering wine. So the orders were taken and we had this scene: 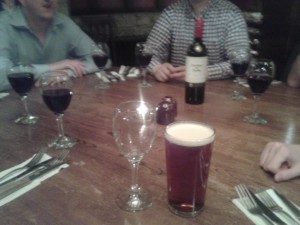 So, do I blame my good British, beer drinking friends for this indiscretion? Did I shun them for the rest of the evening? Well no, they are may friends after all: 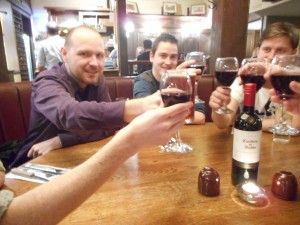 Instead, I blame the real culprits, the Normans. Until some Bastard decided to conquer the country in 1066, ale and mead were the drinks of choice- not just amongst the peasantry but for the Lord’s and Ladies, Kings and Queen’s. The drink of choice amongst the nobility of France at the time however, was and still is wine. So when William the Conqueror/Bastard replaced many of the English nobility with loyal Frenchman promised land, the ale and mead gave way to wine. That all makes sense to me- you take land, you impose your own culture.

What bothers me is all of the snobbery still associated with wine a thousand years later. Try and get beer at a posh function- its a serious challenge- plenty of wine, a choice of red and white but beer? Not so much. What goes best with steak? A pint. What about with lasagne? A pint. What about with… well you get the idea. I’ll concede that I might vary from a real beer to an ice cold lager with a hot curry but there my diversity ends- I like to drink beer and just because I’m in a restaurant having a meal doesn’t mean my tastes have suddenly changed.

If people want to drink wine, that’s fine , I have nothing against that and I’m happy to provide wine when organising an event, but why can’t wine drinkers put snobbery aside and show the same consideration to beer drinkers? There is good news though, there are some of us out there fighting the good fight and I thoroughly enjoyed my pint of Hooky and indeed the rack of ribs I had with it. 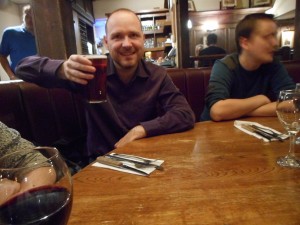