This is the first in a new series of posts on our experiences from a particular spot at a traditional British pub. We’ve been drinking at the Albany in Cardiff for over a decade now and because it’s such a busy place, one of our favourite spots is just outside the front door, using the two conveniently placed posts effectively as single pint tables.

One of the things that makes it such a good spot is people popping out for a cigarette or waiting for a taxi and briefly joining our conversations. Yesterday, we spoke to a man I refer to as Doug Naylor because of his likeness to the Red Dwarf creator. So a surreal experience it was as then as a man who could be the Spitting Image puppet of the creator of a show about space started to talk astronomy and informed us that that night was the best time to see Mars in the night sky. We did look up but it was too cloudy to see any chocolate bars…

Doug Naylor (not the real one obviously…) is most famous of course for his inability to distinguish between Great Paul and Bobby Charlton. I find it quite amusing hearing Paul referred to as Bobby, but the likeness? We’ll leave you to decide: 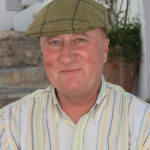