We headed straight inside to be faced with my second sea of people that day for the church was literally standing room only. Emma and her team had created a fantastic atmosphere with lighting, live music and of course racks of real ale that we quickly signed up for by purchasing beer tokens and got sampling. It was hard to believe that an hour earlier Emma had been sat down at home looking relaxed with a cup of tea as if her next big job for the afternoon was to water the pot plants and not in fact overseeing what was in effect a 1960s style “Happening”.
Drinking beer in a church seems to enhance the flavour similar to eating chips by the seaside and the festival was such an enjoyable experience the afternoon flew by enhanced by a variety of live musicians that ranged from a bit of  “Eddie and the Hot Rods” through to a very talented young teenage lad who seemed to be in touch vis his guitar with his very soul. The word had gotten around that Matt and Richard were in town to help with house removals and we were all soon commandeered by Emma to set out lanterns along the church path as the light outside began to fade.
As if planning a beer festival wasn’t enough for one day, Emma had also booked us in for a meal at the Hand and Shears pub opposite. For what time I cannot tell you for I decided to leave everything in Emma’s very capable hands and wait for instructions to simply walk across the road to the pub avoiding the traffic, sit down and enjoy excellent food and fine company. I was placed next to two young parishioners one of whom was an aspiring stand-up comedian who told me that he had lost his confidence but had recently got it back again. That all sounded like a script for the next Tom Cruise movie but he then went on to tell me that his comedy hero and inspiration was Billy Connelly, not a bad role model to have for Connelly has that gift to be able to find humour and colourful stories from life itself from his early days as a welder in the Scottish shipyards right through to old age.
I can just about remember falling into a taxi for the road back to Long Hanborough where the evening was finished off back at Chris & Emma’s home with a rendition of The Twelve Days of Christmas with Matt on piano and Chris on the port.
The next day after a perfect night’s sleep, all our dreams were realised, for having attended a beer festival the day before. we were presented with what was a brilliant breakfast at the B&B. While we ate, our hostess told us of her worries about the weight on the upper floor of the tiles we were asked to ignore in the entrance hall the day before. Matt took time out to inspect the acoustics and discuss with host Ramsay a very large old speaker sitting in the corner that looked like part of a sofa that could easily have come from the nearby Blenheim Palace – I wonder if Mr Churchill practiced his speeches with it.
Matt, Richard, Emma and Chris had a church service to attend and various cars to reposition around the village so I decided to stroll down to the railway station for my train back into Oxford but hardly got out onto the main road when our B&B lady stopped in her car and insisted on giving me a lift, I asked her on route if she was off somewhere nice for the day “No” she replied “Just to pick up more tiles”.
We arrived at the station just as the next train for Oxford was pulling in. That was perfect timing for me but not for those waiting on the platform for this was in fact the delayed 09.55 train! That got me thinking about the young half-welsh, timetable obsessed Gez-look-a-like from the day before and I wondered if there was mileage for him in creating an alternative delayed Oxford to Moreton-in-Marsh train timetable that might be more reliable than the official timetable that only seems to provide information for times of trains that are to be cancelled. The railways were responsible for standardising time throughout the land so this would be a fabulous opportunity to release all that tension and angst in that young fellow by throwing it all back at them! I also would have liked to have asked Bizarro Gez his take on the Normans but that would have forced his inner Mogi to the fore “Bloody Normans do you know they are responsible for introducing wine to our country?”
It was a wonderful weekend in what I am now going to call Hanborough over Fourtharch. 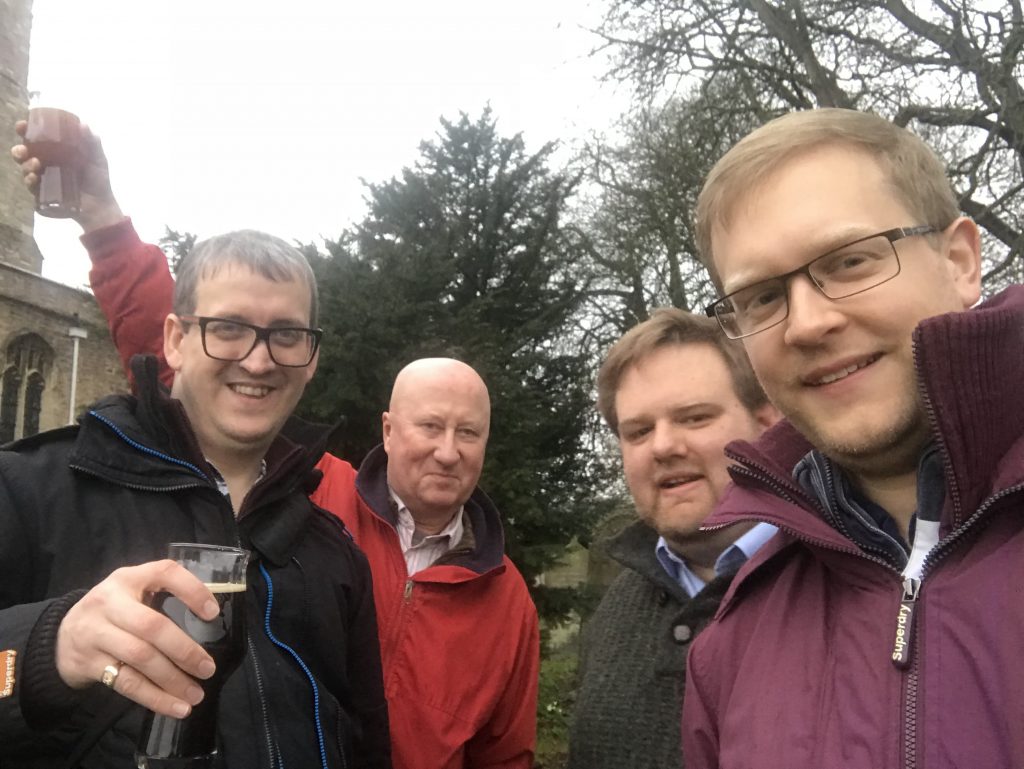