Brother Rhys, brother of Mogi, first joined us on our trip to Oxford.

He became the first person to announce his choice of pub whilst not being there at the time! He was working in India when it was his turn to announce a pub for 2016 and so rather than being in the George Inn in Southwark with the rest of us, The Lady of Mann in Liverpool was announced as the venue for our 2016 trip via Skype from Mumbai. 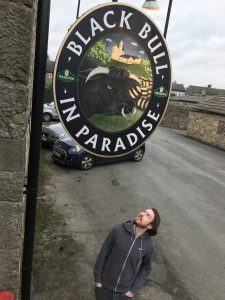