British beer drinkers are setting a pace in the battle for equality and social mobility that Tony Blair and New Labour could only dream of as time is called on the traditional segregated bar lounge, saloon, snug and counter areas in British pubs to be replaced with one homogeneous bar area where all classes, races, pets, children and even wine & coffee drinkers are welcome.
All new build pubs now come as standard with one large barn size lounge bar area and where possible pubs built after the war, like our very own beloved Three Arches are having their interiors knocked through merging the bar with the lounge creating an equality haven that leaves the work of modern day highly paid social engineers lagging far behind. 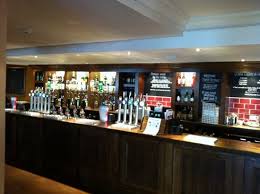 Our country is rich in historical and architectural heritage that includes pubs dating back centuries that are still very much in use today, any attempts to alter the interiors of such pubs in order to appease present day political sensitivities might be seen in the same light as knocking down a 1000 year old wall in a Norman Castle to make way for a wheelchair ramp.

So let us not throw [wait for it] the Babycham out with the dark porter and celebrate instead our wonderful pub heritage for if anything the bar, lounge, and snug areas in British pubs have been the settings for some of the nation’s favourite comedy characters, Coronation Street’s Ena Sharples held court in the Snug at the Rovers Return, the bar in the Black Horse was sanctuary to Bob and Terry in the Likely Lads and of course Del Boy in Only Fools and Horses turned the lounge of the Nags Head into his office and cocktail bar. The pub was the perfect setting for exploiting a comedy vehicle second only to the Skoda – the British class system, a system that pigeonholes and entraps from birth for poor old Ena Sharples would probably have been far happier holding her own with the men in the Rovers Return bar, Bob’s social climbing wife Thelma in the Likely Lads didn’t want her husband in pubs at all while one of the greatest comedy moments of all time was of course Del Boy who after ruling over the lounge bar in the Nags Head over exceeded himself by crossing the class divide into the wine bar where he literally fell flat on his face – through the bar hatch of course. 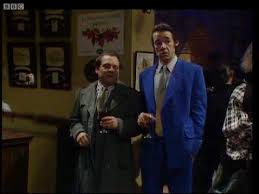 Del Boy just about to fall through the bar

So farewell to the bar, lounge and snug and hello to equality heaven, however an ex-barmaid from the Three Arches said that within the new homogeneous single lounge bar area in the pub, the old regulars ironically still set themselves down where the former bar and lounge used to be, so is it right for social engineers to interfere with the seating arrangements in pubs? As a species most of us are quite happy and content within our own social groups but of course it was the Del Boys of the 1980s who concocted stories about themselves that they believed would impress a higher social group they had aspirations to join, these days the trend is in the opposite direction as it has become almost fashionable to boast of humble working class beginnings – in some cases, just like Del Boy having to make it up – Tony Blair sitting [in the all standing] Gallowgate End at St James’ Park watching Jackie Milburn play for Newcastle United. 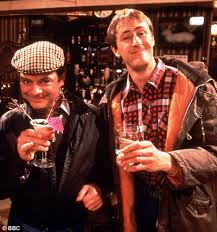 Del and Brother Dave in the Nags Head

So in the future will new build pubs have to attach back on the bar with its sawdust and flagstone floor, bar stools and stark interior to accommodate this new flock of faux working class heroes? There is still more work to be done, as the charity chief executives always say, meanwhile the Fourtharch.com says – keep drinking for equality! 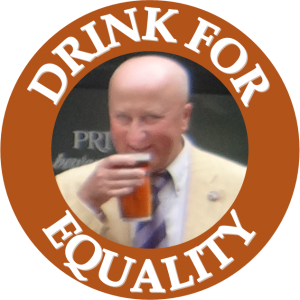