As we count down to our 2018 annual trip, I reflect back to brewery tour #2 from our 2017 annual trip, acknowledging that we were fortunate enough to go on two brewery tours on one trip and you can read about our first tour, of Theakston’s Brewery here. Our second tour of the day was Black Sheep Brewery. You have to love a town with a population of about 1,200 that has two breweries, I love the fact that a town of that size has this sign: 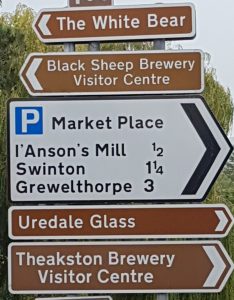 The founding of Black Sheep Brewery is also a great story, with Theakson Brewery no longer under family control, Paul Theakston left them and eventually set up his own brewery. The original plan having set up in the former Lightfoot Brewery was to resurrect that name. Unfortunately for Paul, the name had already been trademarked and in fairness to Theakstons, Lightfoot is a nice pint. The next idea was to use something about sheep given their link to Masham and the Masham Sheep Brewery was considered as an option. It was Paul Theakston’s wife who suggested that since he’s the black sheep of the family, leaving the family brewery, that perhaps Black Sheep Brewery might work. It certainly did, the brewery is doing very well and producing some great beer!

What I enjoyed about the brewery tour (as well as the story of the founding of the brewery!) was the wonderful contrast between modern and traditional. Black Sheep is a modern brewery in the sense that it was only founded in 1992 but most of the equipment was bought up from breweries across the country and is traditional, set in an area with a history of brewing.

The tour starts in a modern room with a video of some of the history and information from a guide on the founding of the brewery and information about their wonderful range of beers. As you go around the brewery however, you see that the methods of brewing are traditional and use the local Yorkshire Square Method. The brewery shop and accompanying bar and restaurant and very modern and serve the range of Black Sheep Beer, which is largely traditional Yorkshire bitter. All in all, a great tour followed by an extensive sampling session!