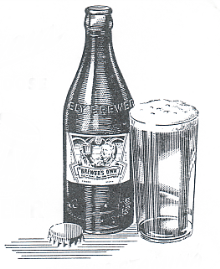 The first ever fourtharch outing [Outing! – not in the way some of you might be thinking] was finally held at the above on Saturday 12th September 2009. For any prospective new members, this was the first outing of what is to become an annual event to meet at a favourite hostelry discovered by one committee member anywhere in the UK and possibly continental Europe.

There is only one rule and that is you must have had at least one pint of real ale in the chosen establishment and concluded that other committee members will enjoy your choice.

The Task [or reason for going]

Once the venue has been chosen and everyone is in attendance or on-site there is only one task to perform, apart from having a jolly good time and that is to decide where next years venue is to be.

The Plan [Plan A]

The whole plan was originally thought up just before Christmas 2008 and the venue suggested was the Sloop, St Ives, Cornwall. Your writer has visited St Ives quite a few times over the years and the last time, about 10 years ago; he or I spent every night of a weeks stay in the Sloop. The Sloop is situated right on the key side at St Ives and although a small pub in a very small town it has a very international feel. Many different accents can be overheard at the bar in the Sloop from Americans, irritating southerners who have just arrived from France on their new yachts right down to the de-rigueur Australian twat.

However, during the run up to Christmas 2008 everyone was just getting over the excitement of Richard and Claire’s wedding and it all seemed a little bit too soon and the whole thing was abandoned. My plans lay in tatters and my dream of having this idea growing into a huge annual event with thousands of real ale drinkers attending and having to be put up in specially built Olympic size villages and breweries offering me free beer in order to influence the choice of venue every year, the Richard & Judy show a column in the Norfolk Nips real ale A4 newsletter, a hit single with me and Cliff Richard……however when I returned to the Albany the following Friday, Mogi said it was back on again but for sometime in 2009.

Plan B [the second plan]

Plan B began to come together at the tennis club AGM on the 10th April 2009 and it was decided that the date for the rematch would be the weekend of the 11th September 2009 and the destination would again be the Sloop, St Ives Cornwall. [No women to be invited Note to self: – best remove that clause very quickly]

Head of Planning Mr Mogi Mog Mogster Mog Mog Morgan could now get down to some serious planning action. His work was ferocious and at every Friday night planning meeting [lounge bar @ the Albany] the talk was of routes to St Ives and various good value B&Bs. The Mogster’s most cunning plan was to have every team member travel to St Ives using different modes of transport – by train, by sea, by plane, cycling, swimming, pogo stick and car. Most committee members live between 200 and 400 miles away from St Ives but Alex Porter was only across the way in Plymouth so everyone demanded that he had to walk it. It was all looking very good right up to the weekend of the 28th August when at the usual planning meeting held at the Albany lounge bar your writer asked for the latest plans for St Ives from chief planning officer Mogi who replied “Everything is in place, accommodation, the pub and all modes of transport have been sorted except for one small problem” “And what would that be?” I asked the Mogster expecting a minor problem such as you cant pick up Channel 5 in Cornwall only to then be told………..

“We are not going”

We had to think quick, our main task was to save the expedition for the nation, to boldly go where no real ale drinker had gone before – to get to a pub that James May had not already visited. Whilst feeling like Scott of the Antarctic I suddenly had a flashback to my wonderful day at the Woodforde’s brewery pub, the Fur and Feather in Norfolk back in February and immediately put this forward to the committee that was very quickly accepted and for the same date – the weekend of the 11th September was back on again! This was an exciting idea and on reflection a much better location even some of the elements of plan B were still in place as I would be flying in from Portugal and Mogi would be arriving by car with committee members Richard and Gez.

Your writer had arrived on the 11th September and was in place at base camp 2 also known as the Hotel Wroxham in Wroxham. The Hotel Wroxham is packed full of 1970s bad taste and as fan of dreadful design the Hotel is almost a holiday in itself. Let me explain: – we are surrounded by so much perfection in design these days, from architecture right down to packaging design that it is a joy and a feast for ones eyes to come across something so dreadfully put together as the Hotel Wroxham [especially the reception area]

Just after noon Base camp 1 was reached or the Holiday Inn Norwich City Centre and part of Norwich United footballers association club by Mogi, Richard and Gez in the Mogimobile. Your writer at this point was now in position and on standby on the railway station platform at Wroxham. I got the text at 14:14 precisely to inform me that team A would be leaving Norwich station @ 15:45 and would arrive at Wroxham @ 16 hundred hours.

At 16 hundred hours precisely the Norwich train arrived and off stepped 3 men wearing women’s clothes, however this was not Mogi, Richard and Gez it was in fact the Cromer cross dressing society’s annual day out to Horning. Suddenly there standing behind me was Mogi, Richard and Gez all ready and excited about a great day out at the Woodforde’s brewery. Our first job was to arrange a taxi and all team members suggested looking into the station phone box for a local taxi flyer and whilst your writer arranged to have us all picked up by Wroxham Cabs, Mogi called up a local hot date line number from a card that he had also picked up in the same phone box.

We were soon on our way, travelling out deep into the unique flat green fields and big blue skies of Norfolk on a wonderfully sunny mid-September afternoon.

Our Scottish Taxi driver dropped us off outside the Woodforde’s brewery shop, which for a small business was a real Aladdin’s cave of brewery related goods plus lots lots more and the team certainly filled their shopping baskets with all kinds of mementos and gifts.

The walk from the gift shop to the pub garden

Anticipation and excitement was now building and as the group took the short walk from the gift shop towards the brewery pub it was a test to see who would break into a trot first to get to the thrills awaiting inside the Fur and Feather. I think I saw three jaws dropping at the sight of a row of barrels straight from the brewery racked up behind the bar, I ordered the predictable Wherry whilst Mogi, Richard and Gez were simply stuck dumb and spoiled for choice.

Although getting towards the middle of September it was a wonderfully sunny afternoon so we decided to have a few pints sat outside in the pub garden surrounded by lush green fields on every side and stretching away into the wonderful peace and quiet that is Norfolk.

The beer & the food

After a few outside and a team photograph [see attachment] we all moved inside to sample the menu and when the spare ribs arrived well that has got to be the subject of another newsletter in itself. We enjoyed ourselves so much that suddenly we were calling up our Taxi to head back to the Hotel Wroxham, the Scotsman who took us to the brewery was now replaced by a rather strange female taxi driver and I believe it was Gez who noticed that the ID picture in the usual place in the cab was of a man – at least Mogi didn’t do one of his men/sister/Norfolk gags.

Although the Hotel Wroxham is bad taste heaven there is one very very pleasant aspect to it and that is the Hotel bar and terrace that overlooks the River Bure. Whilst Gez counted the swans we all contemplated a great first outing and before I waved goodbye to Team A on Wroxham station as they returned to Base Camp 1 in Norwich. I believe a small splinter group then popped in for a quick one at the Coach & Horses, a pub plus microbrewery near Norwich Station.

But what beers did you sample at the Woodforde’s brewery? I hear you ask, well to give you a total feeling of a great day out I publish below for the very first time Mr. Mogi’s drinks list with exact quantities consumed: –

Half an Admirals Reserve

Next years venue chosen by Mogi 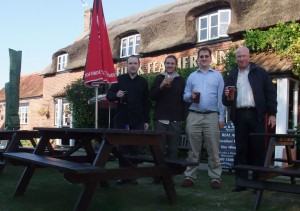 More photo’s of our first trip on our Facebook page.